The news that Meron ( our 8 month old adopted daughter) had TB was a blow, however, we were thrilled that it was a curable disease that could be easily treated with antibiotics.

Luckily, we live in a city that has many specialists to choose from.  Finding a pediatric Infectious disease Dr was our first issue.  We found a great one and started her on three (or was it 4?) antibiotics right away.  In our state it is a law that people with TB needs to do Direct Observation Therapy (DOT).  DOT means that TB pts  need to be observed taking their medicine every day.  TB medication often has bad side effects like joint pain, and stomach upset.  On top of that, the duration of treatment is 9 months.  Think about it.  Most people have a hard time finishing their antibiotic prescriptions if they last 1 week.  9 months of therapy can be tough, especially if the medication makes you feel ill.  So, to protect the community from a highly infectious disease, the state mandates  pts with TB need to take their medicine in front of a health worker for compliance.

Every morning at 7:30 AM, the county health department sends a person to our house to watch us give Meron her medicine.  Overall, she does really well with it.  We initially hid the medication in applesauce or carrot juice.  When the protests became too great, we decided just to give her the medication straight up.  It is what it is (horrible tasting) ,and covering the flavor a bit with applesauce barely hid the taste.

We then had to get a sputum sample from her in order make sure she was on the correct antibiotics.   If we could get a good sample of sputum (lung spit) from her we could be sure that the TB was sensitive to the antibiotics we had her on.   In adults, this sputum sample is easy to get.  “please cough up some phlegm” … In a baby… not as easy….   We took her to the hospital three days a row early in the AM.  The Dr inserted a tube down her nose to get some swallowed spit from her stomach.    NOT FUN for her.  However, this is the test that helped us the most.  The chance that we actually  would isolate the TB in one of these samples was about 50/50.  We lucked out, and 7 weeks later we found out that she had a very fancy type of TB. Multi-drug resistant TB (MDR-TB).     The TB that she had was resistant to several of the antibiotics that she had been on for several months already.  Damn!! !!!

So we had to change it up and start her on a completely new regimen.   She now needed 5 different antibiotics and the treatment would be 18-24 months instead of the standard 9 months.   Four were given by mouth…. and we were used to that by now.  Sadly, one had to be given through her veins (IV).  We got a central IV line placed in her chest and infused her medication at home (with the help of home health) , 3 times per week for 4 months.  A central line is a type of long term IV site that a cancer patient might have.  The trick was to keep her from pulling at it.  We wrapped her up in long sleeve turtle necks, ace bandages, and tape.  I must say that my husband and I did a hell of a job keeping her hands away from that line.  It was a true commitment.

It was a great day when we were finished with the IV medication.  Getting that IV line taken out was WONDERFUL.  From then on, we only had to give her the oral medication twice a day.  The health department continues to come and visit every morning at 7:30.  They health workers that watch Meron take her medicine have become a part of our lives.  They are sweet people that have a soft spot for one of their youngest TB patients.  They come Monday thru Friday.  They trust us to give the night and weekend medication without observation.

The medication can be tough on her little body and we constantly watch her for side effects.  She also gets blood tests to check her liver, thyroid, and kidney function every 3 months. We get eye examinations and hearing tests every 6 months.

This morning I e-mailed our TB Dr to find out what the FINAL date of medication will be.  We are planning a big party for our little girl.  I think April 22 is the day and we are almost there.   We are so lucky for so many reasons……  to have health insurance, to have specialists so close to our home, to be dealing with a curable disease, and to have a daughter that is truly a fighter.  My husband always says that Meron  is the “toughest kid on the block” .

I agree.   Thanks for your time and interest in our TB story.  Feel free to email me with any questions at lauren@ethiopianorphanrelief.org

Here is a link to a video of Meron’s medication administration.  I created this for other parents.   http://www.youtube.com/watch?v=k6bEIKfHmOI

Well…I must say that when we decided to adopt from Ethiopia we definitely knew that our daughter could have some serious health issues. We have all heard stories about the health issues that were discovered once the children came home iwth the adoptive families. Hepatitis B, Hydrocephaly, malnutrition, etc, etc, etc. We also feared and knew that our adoptive daughter could have HIV.  Anything was possible despite all the testing that was done in Ethiopia. I seem to remember that we asked for a “healthy”…or was it “moderately healthy”…female less then 12 months old.  Of course we knew that with any adoption, or pregnancy for that matter, that there are no guarantees.

I remember the day we sat in from of the computer anxiously awaiting the email that contained Meron’s picture and health information. I was 30 weeks pregnant at the time. We had received our “referral call” about 5 days prior and COULD NOT WAIT to see her photograph.

She was adorable. I started crying and said to my husband…”I don’t care what the health info says.” Of course we read her medical history after the tears cleared a bit. She was small. I think maybe 6.5 pounds at 4.5 months.

After the referral the wait for court and travel is excruciating. Our wait became even more intense when we received a phone call from our agency that Meron was sick with pneumonia, apparently for the 2nd time since she was in the orphanage, on oxygen and had a IV placed in her head for fluids and antibiotics…WE NEED TO GET HER NOW!!! It was absolutely the most helpless I have ever felt. She was in a different country fighting for her life and I was stuck waiting for a court date and an OK to travel. WE NEED TO GET HER NOW!!!!

It was a week of torture, prayer and waiting as we received daily updates from the Doctor at her orphanage as to her status. Slowly she  improved, started eating more, and weaning off the oxygen.

She improved dramatically (as most kids do) in a short time. Actually, my agency staff and a few friends that were in Ethiopia picking up their children didn’t recognize her because “she looked so good.”

So we brought her home and took her to our adoption Doctor two days later. She was still small and adorable…12 lbs. 6 oz at 7.5 months. She definitely had some type of lung infection. I could feel it on my hands as I held her tight. She was wheezing and seemed congested. They started her on some antibiotics. This certainly improved her “cold.” We returned to the Doctor one week later for a follow up visit and full physical exam. It was on that day that they placed a PPD test. A very small needle is used to place the medication under the top layer of skin. It is a very non-invasive test (compared to the ones we dealt with later) The tuberculosis skin test (also know as the tuberculin test or PPD test) is a test used to determine if someone has developed an immune response to the bacterium that causes Tuberculosis (TB). I am a RN and noticed immediately the next day that my sweet Meron had a HUGE reaction on her forearm. Usually the test is read 48-72 hours after placement when a medical professional assesses the site by looking at it and running their fingers over the site to see if a bump as formed.  Sadly, I could see that Meron had a positive PPD test from across the room. The response can occur if someone currently has TB, if they were exposed to it in the past, or if they received the BCG vaccine against TB. I poured over Meron’s health records and was thrilled to see that she was given the BCG vaccine at her orphanage.

Armed with the knowledge that she had gotten this vaccination in Ethiopia, I was quite hopeful that her reaction was a false positive and that she was fine. Every person that has a positive PPD gets a chest xray to see if the lungs show signs of TB.

We received a phone call a few hours later. Her chest xray was positive. She had swollen glands (Hilar lumphadenoptahy) in her lungs that were consistent with TB.

That was June 2007…We continue to treat her with 4 different antibiotics every day.

I must say that there is a huge difference when you think of “your adoptive daughter” possibly having a illness compared to the intensity of knowing that your beautiful, loving, vibrant, daughter if fighting a illness that would have killed her without the medication and health insurance card that she is so lucky to have.

There were more than 9 million new cases of TB, and approximately 1.7 million deaths from the disease in 2006. The World Health Organization estimates that there are more then 14 million people world-wide living with TB.

Most TB cases occur in Southeast Asia and Africa. One-third of the number of new TB cases occurs in Southeast Asia, but the estimated incidence per capita is highest in Africa. In addition, Africa has the highest number of estimated deaths due to TB and the highest mortality per capita, with HIV leading to rapid increases in TB incidence in the region.

Tuberculosis–Part 2 will follow in February. Stay tuned for the exciting follow up stores on our treatment of Multi-Drug Resistant TB. If anyone if fighting the disease or has questions about this blog post please feel free to contact me at lauren@ethiopianorphanrelief.org 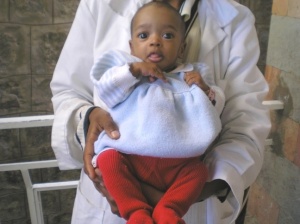 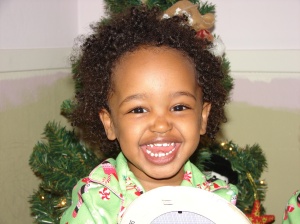